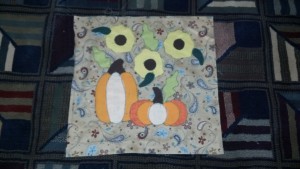 I was totally intimidated by this block because it had so many pieces that were odd shaped. The pattern is adorable and I love it. It was easy to pic colors and I used solids over a paisley background. The top pic is the complete pattern before it was fused down.

Then I decided to simplify the block for my own self. I like it but the stalks  make more sense. Then I ruined the block by using a dark thread to blanket stitch it down. I learned that sometimes you need to change thread color in applique and a lighter thread on the light parts would have made a better end block. I could rip it out and I may just do that.